Any new born cria that fails to suckle and therefore doesn’t get colostrum is in danger of failure of passive transfer of immunity. Unless this is addressed the newborn may be prey to potentially fatal infections. The DVM Rapid Test helps the breeder to identify those cria who might benefit from plasma supplementation.

We have had great success with this valuable tool in assisting us to correct low weight gains, avoiding the onset of septicemia and reviving ill thrift crias.

This quick and easy to use test system involves drawing a small blood sample from the cria at 24+ hours of age. This is spun down to plasma or serum.

This timing allows the antibodies absorbed from the dam’s colostrum after early nursing to be circulated in the cria’s bloodstream. 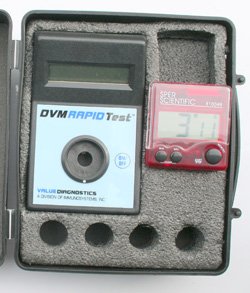 DVM Rapid Test® equipment
The test measures the difference in light transmission using a small spectrophotometer. A cria serum or plasma sample alone is used to zero the instrument. The same sample is incubated for 10 minutes at room temperature with camelid reagent antigens and put into the reading slot on the instrument. The resulting light transmission reading is entered into a table provided with the spectrophotometer to identify the IgG level. It is a measure of the reaction between the cria antibodies and the reagent antigens. Thus the lower the light transmission (higher turbidity in the reaction), the higher the IgG level in the cria sample.

Antibodies are produced by the immune system in response to antigenic (foreign molecule) exposure.  They are protein molecules which complex with foreign substances such as bacteria and viruses within the body to help remove them.  Neonatal camelids are thought not to be fully capable of creating antibodies until approximately eight weeks after birth.  Preformed protective antibodies are transferred to the neonatal circulation across the intestinal tract from consumption of the dam’s colostrum, the first milk after birthing.  This transfer occurs during the first 24 hours after birth only, with most of the transfer occurring within the first 12 hours.  It is therefore important that the consumption of antibody rich colostrum occurs shortly after birth.  These antibodies are what protect the cria from disease while its immune system is developing.

All immunoglobulins share a basic structure (figure 1) except camelids and a few other unrelated species (notably sharks).  The antibodies of major importance in camelid colostrum are all of the IgG class (immunoglobulin G).  Of three identified so far, IgG1 has the classical structure and IgG2 and IgG3 have the heavy chain antibody structure.  IgG1 is the one present in the largest quantity (Daley, 2007). 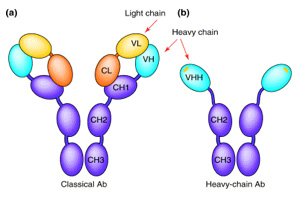 Colostrum antibody levels depend on the immune system competence of the dam, as in, does her immune system respond to foreign substances?  The dam’s specific environmental challenges also determine what antibodies she produces. Colostrum is also an excellent source of nutrition for the neonate in addition to providing the cria with these preformed antibodies.

Colostrum from other species (most commonly from goats or cows) may be used if the dam has no milk.

Colostrum quality depends on the level of antibodies in the dam’s milk.  The concentration of IgG in alpaca colostrum decreases rapidly in the first 24 hours (Daley, 2007).  Consumption depends on the nursing of the cria and amount of milk produced by the dam.

Slow or premature crias or reluctant mothers will decrease that.  Absorption of antibodies also depends on early consumption by the cria before the gut becomes impervious to large protein molecules.  Interference at any step in the process will affect the antibody level in the cria and increase the risk of infection, as these maternally derived antibodies are used for protection while the cria’s own immune system undergoes maturation during the first two months of life.